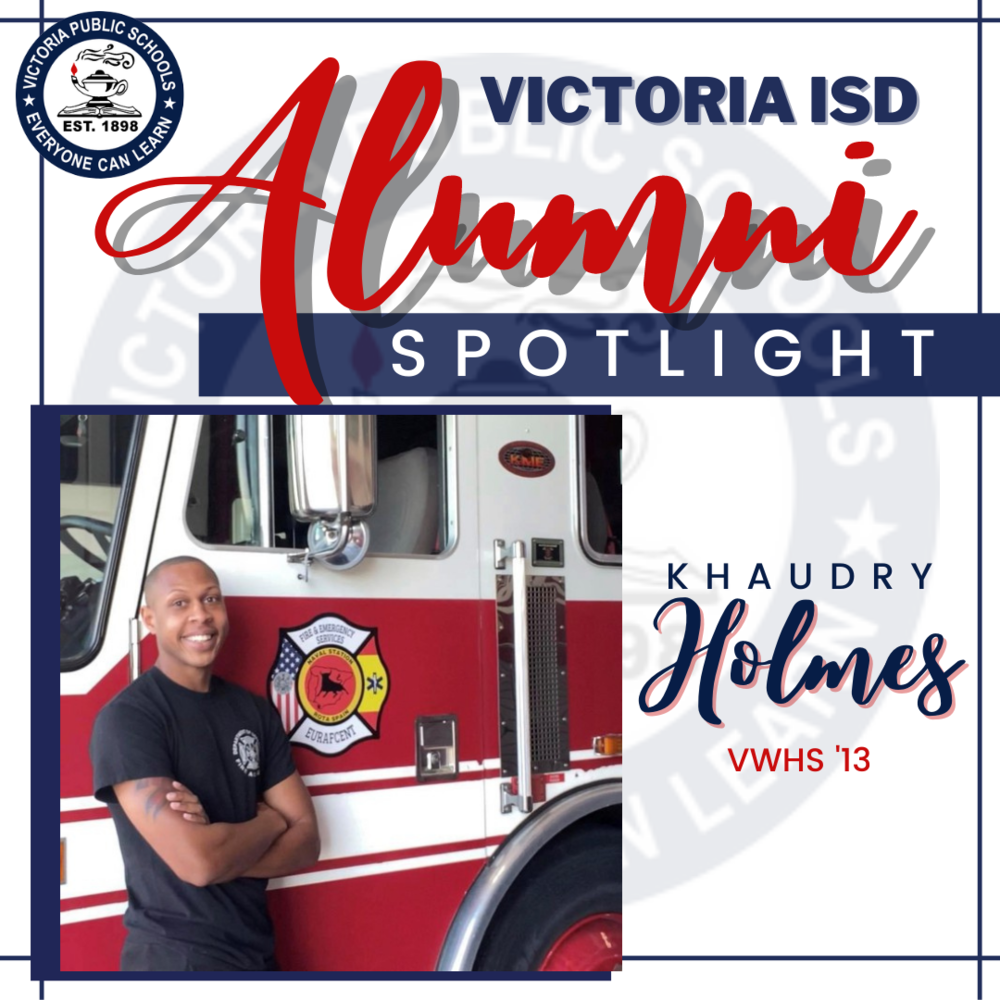 Growing up, kids face different experiences, circumstances, and hardships. Some of us grew up in a two-parent household, some a one-parent household. Some of us had cars waiting for us by the time we got our driver’s license at 16, while some of us walked or rode the bus to school until graduation. Some of us experienced the loss of a loved one during high school. This alumnus, Khaudry Holmes, experienced his own great circumstances and hardships throughout high school that have made him who he is today.

Khaudry is a 2013 graduate of Victoria West High School. Having moved around a lot, the only other school he attended through VISD was Rowland Elementary.

After a life full of bouncing around from place to place, school to school, and even being homeschooled at one point, Khaudry returned to Victoria and began attending Victoria West his sophomore year of high school. When the enrollment boundaries for East and West changed during his senior year, these changes affected Khaudry and the home he lived in. Though before he lived in an area that went to Victoria West, the boundary changes made his home become part of Victoria East. Tired of changes, Khaudry did whatever he could to stay at Victoria West for the remainder of his time in high school.

In order to stay at Victoria West, Khaudry began once again bouncing from home to home, from family members to friends, finding anywhere he could lay his head at night. At this point, Khaudry was just trying to be able to play football, participate in choir, and graduate high school. Little did he know, he had the support he’d always needed right around the corner.

Victoria ISD’s Kidz Connection Center and Gloria Martinez, student success facilitator at Liberty Academy, stepped in to support Khaudry with the needs he had. Having the extra support and insight to resources, Khaudry was able to learn more about opportunities beyond high school, something he didn’t think was an option.

When the time for seniors to submit their scholarship applications and essays came around, Khaudry submitted an essay. Like most other students, once his essay was submitted, that was that for Khaudry. But then came the day that Khaudry notes as one of the most memorable for him during his time in high school.

Victoria West hosted a Scholarship Day where students who have received scholarships are notified. They get to bring guests with them and celebrate their accomplishments. Khaudry was invited to the event, and having no one to attend with him, asked Gloria to be there for him.

It was ultimately a great decision for Khaudry to have Gloria there, who had also brought Yvonne Rossman, Family & KIDZConnection Coordinator/Highly Mobile & At-Risk Student Programs Coordinator, as they were the loudest people in the building when it was announced that Khaudry’s essay won him a $150,000 scholarship to the U.S. Navy.

Fast forward to present day, and Petty Officer second class Khaudry Holmes is on track to complete his second term in the Navy. He is currently stationed overseas in Spain and works as an Aircraft Handler, specifically a Firefighter. After what will be 9 years, Khaudry will be getting out of the Navy in July 2022 where he will be laterally transferred to the Department of Defense to work as a Firefighter.

Khaudry credits the unwavering support he received from VISD’s Kidz Connection, and specifically Gloria Martinez to him being able to focus on his schoolwork, learn about the opportunities beyond high school, and ultimately end up where he is today.

“Don’t be afraid to ask for help. Everybody is going through their own different situations, some people may be going through something worse than you,” Khaudry said. “However, there are always going to be people around that are willing to give you a hand and push you to the next phase of where you need to go.”

VISD’s Kidz Connection supports students and families with a variety of needs. This includes necessities such as clothing, hygiene items, food, and more. Kidz Connection offers support to students subjected to homelessness, foster care, transitional living, or pregnancy-related services. Kidz Connection is student-first oriented and works to help with anything that could interfere with a student’s ability to attend school every day.

Talk to us! We want to share about VISD alumni and what you’ve been up to since high school. If you are a VISD alumnus or know any alumni, email us at visdcommunications@visd.net with your contact information, and we’ll reach out to gather information from you.

Sienna Rodriguez is the communications specialist at Victoria ISD.